Polyandry is one of the rarest forms of marriage systems, but it is common in Tibet and has been practiced for a long period of time. It is also described as the ideal form of marriage and family. The way it works is such that blood brothers belonging to the same family share a wife. They operate on a patrilocal system where the wife leaves her own family and comes to live with her husbands.

All the brothers/husbands will be having sexual relations with the shared wife and the norm is for the wife to treat all the brothers the same. Tibetan males and females do not find such behavior unusual or scandalous. All children born from this family will treat all fathers equally, even though they have only one biological father. Divorce is also relatively simple in their society. Should a brother feel unhappy in the “family”, all he had to do was to leave the house and set up his own household. In the case where there are young siblings, for instance a family with three sons, aged 25, 17 and 8. The youngest son aged 8 would not participate in the wedding ceremony, but he would still have a share of the “wife” and will engage in sexual activities and perform his duties as a husband when he comes of age.

The Tibetans' explanation for polyandry is materialistic. From the husband’s perspective, having a common wife prevented the division of land, family farm and animals hence facilitating a higher standard of living in the family. Brothers inherit the land collectively and stay together to work on the land as they share a wife. Thus, preventing the fragmentation of the land and ensuring that they maintain their ownership of land. 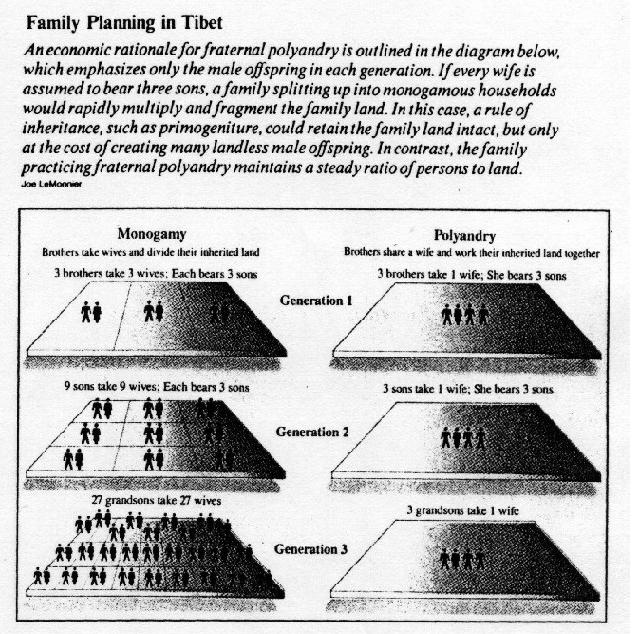 From the wife’s perspective, in addition to the prevention of the fragmentation of the land, her standard of living would be better as she has more husbands to care for her and her children. However despite that there are tensions in the system when it is lived out by Tibetans, for instance the large age gap between the wife and the youngest husband and other cultural complexities.

From our point of view, it seems unusual for polyandry to happen as there is always the stereotypical notion that males are possessive over their spouses and sharing a wife hurts their pride or ego. In our society, we view this as adultery and that the wife is cheating on his husband, and what makes it worse is that she is cheating on him with his brother! Imagine the amount of drama in such a situation! However in Tibet, this occurrence is common and socially accepted. This shows how the diversity in cultures and kinship and marriage patterns across the world. Looking at this phenomena from a gender studies perspective, one might assume that having multiple husbands empowers the woman more, however this is not the case as the husbands are still the heads of the family. Having a common wife is just to prevent the fragmentation of the land and property, and in this case this system serves to reinforce the subordination of females, as they are still under the control of their husbands.

Comparing the situation in Tibet with that of Dadi’s Family, it seems to echo the issues families in agricultural societies face with the inheritance of land. In Dadi’s Family, Dadi vehemently objected splitting the land and inheritance as it meant that family support networks would collapse. Similarly in Tibet, the material reason for polyandry is to ensure that land remains in the family. It is noted that with new economic opportunities and social mobility, polyandry might cease to exist in Tibet, which mirrors that in Dadi’s Family. This goes further to illustrate how kinship and family stuctures are shaped and influenced by external factors such as the economy and that state.

References:
When Brothers Share a Wife by Melvyn C. Goldstein