Introduction
“The Sa’dan Toraja number approximately 350,000 and are primarily wet-rice farmers whose homeland comprises the administrative region (kapbupaten) of Tana Toraja, located in the northern highlands of South Sulawesi, Indonesia.” (Tsintjilonis, 2000, p. 14) The Toraja people are a people rich in their own unique culture, and one major area of interest is that of their death and funeral rituals.

Perceptions Towards Death
To the Torajans, a funeral is not just a funeral alone; a myriad of meanings are embedded into a funeral and its rituals. It is during death that sadness, longing and pain are culturally elaborated and highly visible in the Torajan society. They also lead their lives in preparation for death because death is seen as a major milestone in one’s life. This therefore justifies the elaborate death rituals of the Torajans. (Tsintjilonis, 2000)


Youtube Video: The History Channel explores death rituals and rites among the Toraja culture,
an interesting watch especially from 3:47 onwards.
Similarly, these elaborate death rituals are reflective of the status of the deceased; the more elaborated the funeral, the more important the status of the deceased. They believe that the deceased are important as they link status, wealth and power together. These funerals are actually manifestation of the Torajan belief in Siri, which is honour and shame, evident throughout their cultural and ritual practices. Sacrifice and exchange are also important elements in their cosmology. They believe that the dead has humanly characteristics, just like the living. If the dead miss the living, they might take the living with them. Therefore, the living tries to satisfy the dead through the sacrificing of animals to prevent them from taking away their family members.

Pre-funeral
Torajans had to prepare the Rante, or funeral site, by constructing shelters for the large group of audience. Another ritual is also normally conducted before the funeral, which is known as the ritual “to make a dead man walk”. In the past, as villages of the Torajans were very isolated, the dead had to walk back to his or her village in order to be present at his or her own funeral. The Mamasa or West Torajans were more well-known for this practice. However, in the modern day, this ritual is no longer practiced in this manner. Instead, the deceased is made to keep breathing till the arrival of all their family members. The ritual is also performed on animals where buffalos without heads are made to walk. These demonstrations are to prove that the Torajan’s ability to revive the dead has not been lost from the community.

Funeral
The funerals of the Torajans are also known as Rambu Soloq, meaning the rites of the dead of Tana Toraja. In addition to the funeral procedures, the Torajans have other sacrificial rituals like the buffalo sacrifice and the cockfight.

The Rambu Soloq will commence with music, funeral chants and mourning dances. Mourning dances, known as Ma’badong, are thought to be an important aesthetic form as they consist of the family members of the dead, holding hands and forming a large circle, reciting poetry that describes the journey from birth to death. Crying and wailing might be heard as well. Sometimes, people might faint from wailing due to excessive sorrow and pain. However, not all who faint are upset. Some may do so in sympathy, while others may do so as the death reminds them of the death of their own family member. All these are considered traditional expressions of grief of the Torajans, which should be seen at a funeral.

Secondly, the body of the deceased would be wrapped in layers of cloth and kept in a Tongkonan, which is a traditional ancestral house. The size of these Tongkonan reflects siri’; the bigger the Tongkonan, the more honour the deceased receive and vice versa. 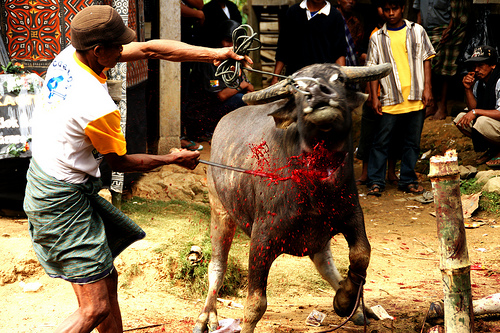 Thirdly, buffaloes will be sacrificed in a ritual called Tinggoro, which is the climax of the funeral. The buffaloes will first compete against each other before they are cut at the neck and allowed to bleed to death. The buffalos will then be slaughtered and meat will be distributed to guests as gifts. This is seen as a form of !Haxaro exchange between the deceased family and their guests. Siri’ is also displayed through the number of buffalos sacrificed. The purpose of this ritual is to protect the deceased’s journey to the land of the dead.

Lastly, cockfights are considered a sacred ritual as it involved the spilling of blood on the earth. However, this ritual has degenerated into an excuse for people to gamble. Coupled with telecommunication advancements, such gambling are more rampant as people are able to bet via telephones.

Post-Funeral
Torajans do not bury their dead immediately. Instead, the dead will be kept in the family’s home for about two to five years as they are considered to be “alive”, thus food and drinks must be served to them. The length of this preservation is also reflective of siri; the longer the family is able to preserve the body, the richer and better (and hence an indication of higher status) the family is. When the preservation period has past, the dead will be placed into a tomb.

Tombs of the Torajans were carved out of solid rocks in a limestone cliff guarded by human effigies, known as Tau tau. Tau tau, is a form of animalistic belief. They are normally made for deceased if they are of noble heritage. Tau taus are made to resemble the deceased as the Torajans feel that there is a symbolic connection based on the resemblance. 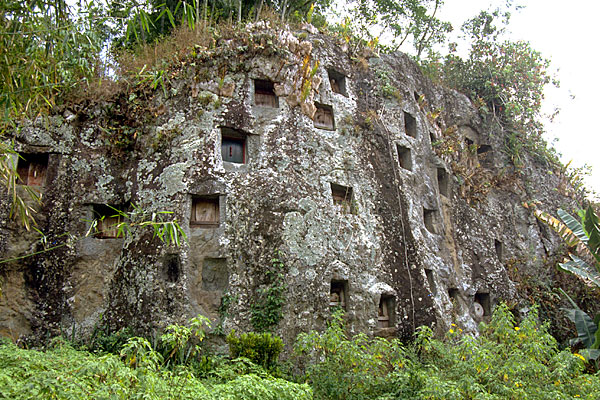 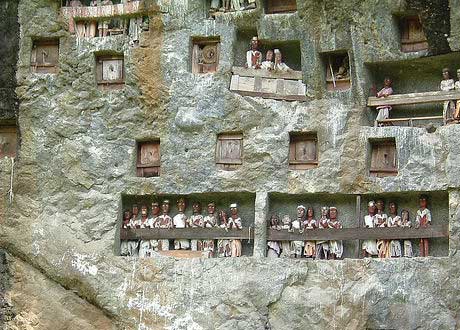 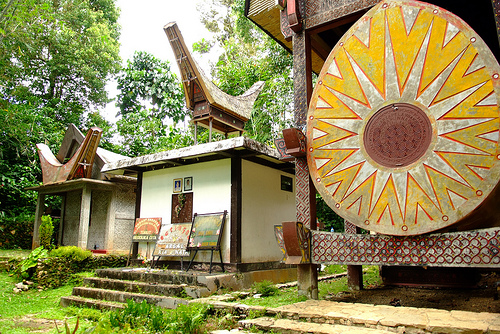 (left, middle) Torajan cliff graves: Lemo and Erong graves.
(right) Torajan house graves: Patane graves of contemporary Christian Torajans.
Pictures from: (left) http://documentingreality.com (middle) http://amazingindonesia.net (right) http://torajatreasures.com
There are three types of burials in the Torajan culture. The first is a Lemo type of grave where the corpse is wrapped in sarong and placed inside a coffin, which will then be placed into a hole in the stonewall. The second type of grave is called the Erong grave. In the grave, the corpse is placed into a huge coffin that can contain up to five corpses, which will then be places into a hole in the stonewall. The third type of grave is the Patane grave. This is also known as the modern grave of Christian Torajans. These graves are shaped like houses, as they are seen as a second home to the dead. Therefore, one grave, is one ‘house’, and hence each grave houses one family post-mortem. The coffins of the family’s deceased will be placed inside these ‘houses’, which can contain up to twenty-five corpses.

Another post-funeral ritual of the Torajans is called Manene, meaning the ceremony of cleaning corpses. This is a symbolic and social process where Torajans clean the coffins of the dead once every year or once in five years or once in ten years. Family members will change the clothes of the dead, replace the damaged coffins and gather the scattered bones. As opposed to the funeral, the emotional tone of Manene is one of happiness as the families are meeting the deceased again. In some sense, this ceremony is a way for children to repay their parents who have passed on as their parents were the ones who gave them life.

Concluding Statement
As the Toraja society "succumbs" to modernisation, the traditional structures of Torajan’s death cultures and rituals have also changed. Instead of focusing on the representation of the power of the deceased, the focus has shifted to how the living interacts with the dead through symbolic rituals and meanings. However, remembering their ancestors and the deceased continue to be performed as a collective ritual by the Torajans, and hence serves as a tangible expression of the power of the dead.