For a long time it seems, all societies have been and continue to be highly obsessed with differences, with oddity, with the “unfamiliar” that they are simply curious of. And on this page, I will focus on our fetishism of the “others” in the current fashion scene and the criticisms that emerged.

Being a member of the “fashion victim” community, I instinctively pay close attention to the short-span fashion trends that dominate and replace each other endlessly in the fashion scene. Cliché as it may sound, the time-space barriers overcame by globalization allow us to view not just the fashion trends in our country but also, those global ones through online shopping sites and fashion blogs. Therefore based on my observations of local and global fashion advertisements, runways, accessories and clothes, I noticed the attempts at imitating a certain “native” design or style, and labeling of fashion commodities as “native”, “exotic” or “oriental” in part of corporations’ marketing strategy. Deploying such strategic connotations of difference attract attention to the item and appeal to those who wishes to take on a distinctive or distinguished identity through consumption that allow them to stand out in the crowd. 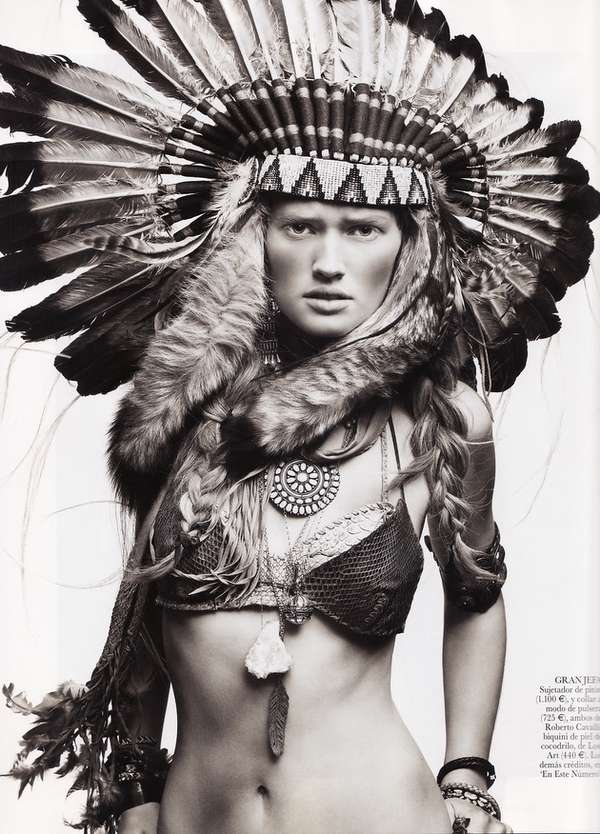 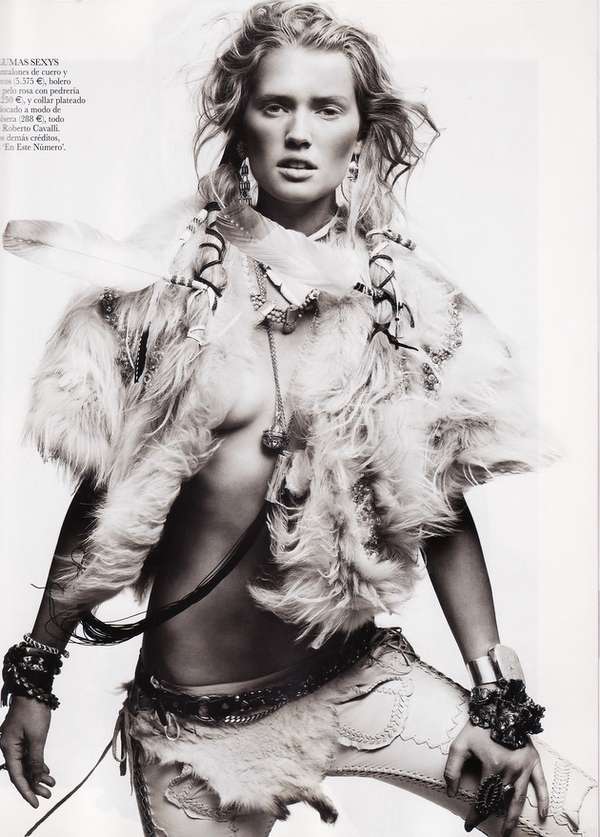 This photo from Vogue Spain April 2011 editorial is hailed as “picture-perfect” by author of the website. The model is decorated with piles of jewelery matched with lots of fringe, feathers, fur and crochet, her hair styled in loose braids, and on her head sat the most prominent item of all - the tribal headdress. In the attempt to sell this native-style bikini, all the stereotypes we associate with the authentic everyday Native American style is drawn on, and just like the comedic cartoons we watched as children, the model looks Native American now because she is wearing feathers and her hair is braided. In fact, these few accessories on the model as described are repetitive in many fashion editorials in magazines selling the Native American style commodities, and we now know that this is how we visually construct this community in our heads. However, as if afraid that consumers may overlook this distinctive Native American style in the accessories, the photographer added the tribal headdress which acts almost like an icon of the Native American culture due to its symbolic connotations. Now how can anyone miss out this Native American girl in the photo? You just can’t ignore the gigantic iconic headdress that has taken up fifty per cent of the image, can you?

Undeniably, issues of representations can never be resolved. They accompany all visual texts because objectivity or a neutral stance is never possible. So, what then is the next best alternative? That would be an attempt to situate an image production closer to reality and neutrality, which can be achieved through avoidance of stereotyping (especially negative ones that we tend to use casually due to the discourse of “others’” inferiority) based on what you imagine them to be just because that’s the popular representations of them in media. Other than this general issue of its reflection of reality lies two more significant concerns about the representation: our “playing around” of the symbolic headdress, and the nudity in portrayals.

As in the case of this picture, the model donning of the tribal headdress so causally is considered highly disrespectful to the Native American community because of the symbolic connotations that their people attach to it. Instead of being a mere accessory to others, the tribal headdress is of sacred value to the natives and is reserved for ceremonies and for the honorable and powerful few in the tribe. As such, it is necessary for people to understand that different iconic items have special meanings to the natives and thus we need to be more culturally sensitive. Although we agree that high levels of flesh-showing or nudity in advertising is commonplace in today’s society, there is a need to realize that the portrayal now is not just of a white women selling fashion, but also, a symbolic representation of what constitutes Native American. Therefore the depictions of this particular style will be translated into the audiences’ perceptions and stereotypes of the native community. And it is not true that Native Americans are not scantily-clad or nude, and highly sexualized people, right?

Besides our fetishism with the exotic natives being largely visible in the high-fashion scene, it also pervades our popular commercialized fashion scene characterized by mass production and mass consumption of, including the “native” commodities. This has sparked controversies of commodification of the natives and their cultures to be consumed by others, and lack of cultural sensitivity in producers who created fashion commodities deemed racist and insulting to the natives.

Though some may wish to claim that commodification and commercialization of the indigenous cultures is a positive step to bridging the gap between the natives and the "outsiders" because the "outsiders" can now wear these "Navajo" fashion items and understand the Navajo culture better, I do not subscribe to such optimism. Firstly, the Navajo lady who wrote in expressed that the Navajo print, as Urban Outfitters had named them, is not a true representation of the ones belonging to their cultures, and is thus misleading. Secondly, how can one claim to understand an unfamiliar culture he/she has never encountered (or never will) in his/her life just by wearing some self-declared "traditional" prints? Do you really understand the culture through consumption of this "native fashion" when the agenda behind u picking item is because it is fashionable, and not because it is "Navajo" to you? And so, do you understand the Navajo way of life better now just because you are wearing this Navajo Hipster Panty? 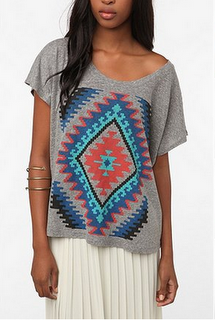 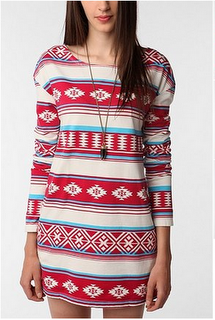 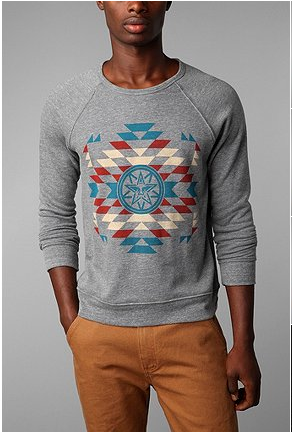 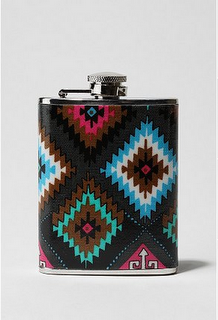 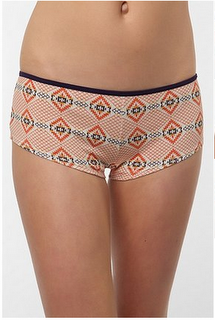 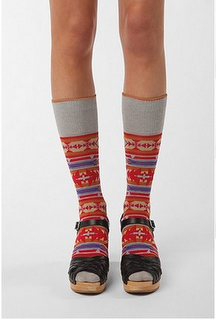 All in all, misleading and negative cultural appropriations in fashion photography and commodities should not be taken lightly as fashion acts as a political tool with the potential to perpetrate symbolic violence on the native community. Cultural appropriations, in their representations and stereotypes, will contribute to the circulation of particular discourses, especially that of the natives being primitive and inferior to the Whites, and shape widespread perceptions and attitudes towards this unfamiliar community of people. The specific way of seeing positioned within consumption of the images or commodities is very influential due to them being one of the very few outlets whereby we gain information about this community from, and their global circulation as seen from the increasing appearance of “native” prints in local blogshops.


for more fashion photography in the native style for casual viewing, visit trendhunter.com.
(you can note how they are always using similar props or elements of Native Americans/ other tribes iconography) 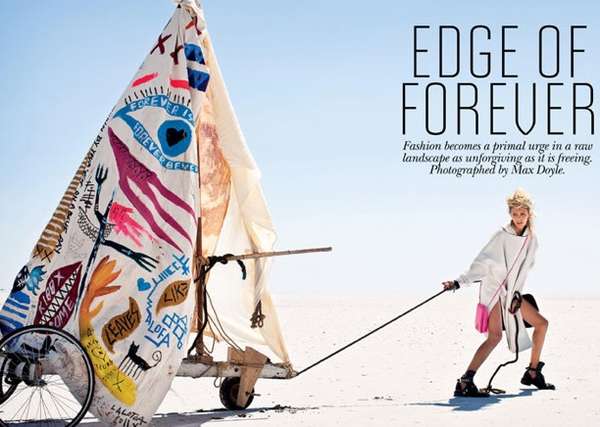 I found this video Don't Trend on my Culture which illustrates the points that i have made. Do watch it if you have the time!