Anthropology enhances the study of the myriad cultures of the world, shedding light on some of the most fascinating rituals that are practised by the various societies. In our cultural web of life, the religious beliefs and moralistic nature of people tend to produce the most profound customs. Among these practices lies an ancient Hindu tradition, that is widely banned in most parts of India, but still practised discreetly by the smaller communities. Sati, a funeral custom, was the act of a widow throwing herself into her dead husband’s pyre voluntarily or through the permission of her in-laws. This tradition first appeared particularly in several communities in Southern India especially among the higher castes of the Indian society, and then dispersed to the northern regions in India, the states of Rajasthan, Bengal and Madya Pradhesh bearing the highest incidence of this ritual. Sati is estimated to have occurred in about 1% of the total Indian population, affecting both royal families and ordinary women of the past.

The practice of Sati bears origins from the Hindu Puranas (scriptures) where the Goddess Sati was said to have sacrificed her life by throwing herself into the fire, as she was unable to bear the shame that was bestowed upon her husband, Lord Shiva, by her very own father, Daksha. In an attempt to protect the honor of her husband, Goddess Sati invoked her yogic powers and self-immolated her body. 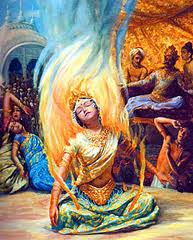 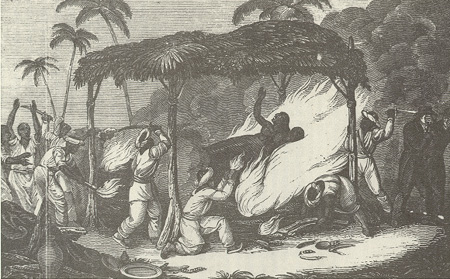 This act of sacrifice was then followed by women in India to demonstrate their love, devotion and piety for their husband. In pre-modern times, Sati had essentially symbolized a virtuous woman, and therefore a woman who committed sati, by burning to death on her husband’s funeral pyre was deemed the most virtuous of all. This act of martyrdom earned them the respect and status of a Goddess themselves.

However, laws against the practice of sati were introduced in order to abolish this practice entirely. In the contemporary society, the act of sati has been appropriated as a symbol of female subordination, and was considered by feminists as a ritual used to rope women of their voice, freedom and position in the male-dominated society. Also, there have been accounts where women were forced or pressured into self- immolation against their wishes, simply because it was considered the culture of the society. In some traditional Indian societies, a widow had no social value and was only considered a burden to the family. Despite human rights movements all over India, cases of Sati have still been reported as late as 2006 and have caused a lot of controversy in the various societies. As such, the practice of sati, though legally and morally unacceptable, is still perceived with mixed opinions due to its roots of the Indian culture and tradition. Through such examples of rituals, we are therefore able to understand how all people are simply cultural options of different visions of life.
Bibliography:
Anand A. Yang. (1989) "Whose Sati? : Widow Burning in Early 19th Century India."Journal of Women's History1.2. Project MUSE. pp 8-33.

Courtright, Paul B. (1995) "Sati,Sacrifice and Marriage: The Modernity of Tradition." In Lindsey Harlan and Paul B. Courtright eds.,From the Margins of Hindu Marriage: Essays on Gender, Religion and Culture.New York: Oxford University Press

Hawley, J. S.(1994) Sati, the Blessing and the Curse: The Burning of Wives in India.New York: Oxford University Press