Our traditional cultures and cultural domain

The Bedouins
We chose the Bedouins because of their rich and ancient tribal history. They also have a deeply romanticized and mystical image, in part due to their long-standing tradition of writing beautiful poetry – an image that we wanted to deconstruct and analyze. The famous sociologist Ibn Khaldun was the first to realize the deep cleavage that existed in Arab society – the badu-hadar (Bedouin-sedentary) division. This schism has become less important over the years - as modernization and globalization have affected urban and tribal societies alike – but it still exists. We therefore thought it would be interesting to study the Bedouins as they occupy a fascinating, complex place in the modern Arab world. They are, in a sense, caught between the forces of tradition and modernity – and only time will tell which force dominates. 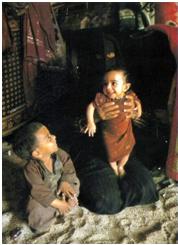 Figure 1: A Bedouin woman showing off her child

The Bedouins are not a homogenous group. They are desert dwellers that originated from Saudi Arabia but have now spread across many countries in the Middle East and North Africa – including but not limited to Yemen, Jordan, Syria, Israel, Egypt, Algeria and Libya. There are 4 million Bedouins living in the Arab world. They are classified as Arabs, but at the same time are very different from the Arabs. They have their own kinship systems, rituals, cultures, marriage practices and much more – and these differ as much within the Bedouins as they do between the Bedouins and the other Arabs.

Some prominent Bedouin tribes include the Negev Bedouin of Israel, the Dahab Bedouins from the Sinai Peninsula in Egypt, the Awlad ‘Ali tribes that trace their origins to Libya, the Rwala of Saudi Arabia and the Magharba Bedouin of Israel. In this project, we will be focusing on the Bedouin as a whole , although acknowledging that they are a heterogeneous society every step of the way. 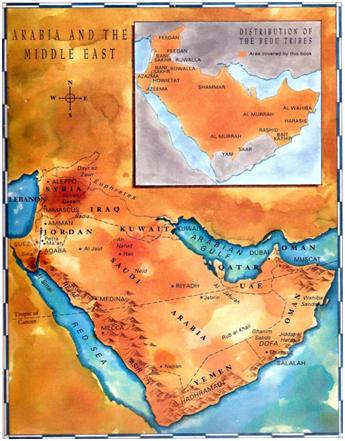 The Dobe Ju/’hoansi
Near the border of Namibia and Botswana lies a cluster of waterholes that was of great interest to the Anthropologist Richard Lee – and one that is also of analytical importance to us. This region is called Dobe, and the people who inhabit it are called the Dobe Ju/’hoansi. The Dobe Ju/’hoansi are hunter-gatherers whose main source of water comes from the !Kangwa Molapo river valley in the north-west Kalahari desert. Like the Bedouins, the Dobe Ju/’hoansi face a plethora of challenges in the new millennium, particularly with respect to their hunter-gatherer lifestyle. More and more Ju/’hoansi are settling down and growing crops, or participating in the mainstream economy in other ways. We thought it was interesting that both our traditional cultures faced this struggle between the nomad lifestyle and the sedentary lifestyle. 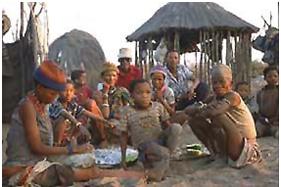 Our Domain
We chose marriage for our domain because it takes on many diverse forms in different societies. Also, marriage can be approached from various perspectives – from the vantage points of the man, the woman, the extended family and even the society at large. Since marriage is such an all-encompassing domain, we have decided to narrow our focus for the sake of this project and discuss five main aspects of marriage, and their implications for society.

Endogamous Marriage: Here we juxtapose the domains of marriage and kinship. We use kinship concepts to explain the practice of endogamy and its prevalence and absence in our two traditional cultures.

Polygamy: We explore polygamy from the perspective of both men and women. We treat polygamy as a complex practice which has many social, economic and even political functions.

Sexuality and Women’s rights: The concepts of marriage, sexuality and women’s rights are inextricably intertwined. We cannot do a study of marriage in Bedouin and Ju/’hoansi society without looking at women’s roles in marriage. Furthermore, we cannot analyze the role(s) of women in marriage without understanding how the concept of sex is treated in each culture and the attitudes, taboos and beliefs attached to it.

Divorce and Remarriage: When a marriage works out, it is great for those involved. Unfortunately, many marriages end in divorce. Remarriage may follow divorce, creating new families and new definitions of kinship. Divorce rates are skyrocketing in cities around the world, but we were surprised to learn that divorce is just as common (if not more common!) in the two traditional cultures that we studied.

The Socio-economic dimension of Marriage: When studying a concept in detail, it is important to take a multi-disciplinary approach. This is why we wanted to study marriage from a broader socio-economic perspective. Practices such as dowry, gift exchange and even the marriage ceremony itself demonstrate the many interactions that exist between marriage, economics and society.


We wanted to avoid studying each concept in isolation, and therefore we persistently attempt to find undercurrents that connect these aspects. This way, we strive for depth as well as breadth in our project. Moreover, an overarching theme in our project relates to the social functions of marriage practices. It is important to refrain from merely providing a description of a particular practice, but to analyze and understand it in terms of its social functionality. And this is exactly what we have tried to do throughout our project.

Lastly, it is very easy to look at practices such as endogamy and polygamy and assume that they are practiced solely in traditional, non-industrialized cultures. This idea is a fallacious one. To understand practices like polygamy, for example, from an un-biased perspective, we must realize that it is prevalent even in western, urbanized societies! The video below is a humorous example of how polygamy – a supposedly ‘backward’ practice – is treated in urban America. In true American fashion, this particular polygamous family even has its own reality television show!