Objectivity is more important and relevant than ever in today’s globalised world, however there needs to be a relook at the extent as to which one can be objective in the contemporary world.

The concept of objectivity can be broken down into two parts where the first is preventing ethnocentrism by emphasizing value neutrality and the second is not having any preconceived notions so as to remain objective. Objectivity can be defined as the need for value-neutrality and to avoid prejudices and pre-conceived notions. It can also be understood as not judging others according to one’s cultural standards and having the belief that one’s group (cultural, nation) is superior. This concept is understood as anti-ethnocentrism in contemporary discourse.
Developments in telecommunications and transportation make the world interconnected, increasing the chances of interaction with other cultures and parts of the world. Hence, objectivity will be very much applied in daily interactions, especially when encountering people of other nationalities and cultural background.Objectivity and value neutrality are also essential in helping us understand contemporary events such as immigration and cultural conflicts. Globalisation has resulted in a more interconnected world with rapid movement of people with diverse cultures and nationalities. Living in a multi-cultural society such as Singapore, the idea of value-neutrality is even more important and relevant than ever to ensure mutual understanding and diplomatic relationships. Being anti-ethnocentric and value-neutral reduces cultural clashes between different groups, as no one culture views their culture as more superior and negative preconceived notions are not formed, hence interactions between cultures are diplomatic.
There has been a lot of tension regarding foreign immigrants and race in Singapore recently. A recent conflict between an Indian family and their Chinese immigrant neighbours over curry clearly illustrates the tension between immigrants and Singaporeans (Suhartono, 2011). In addition to that there are some stereotypical notions of foreign construction workers perpetuated by the mass media for example in The Noose, a local programme. Local actors take on the roles of Leticia, an Indonesian maid, Terry, a Bangladesh worker, Lulu, a Chinese immigrant, presenting them in a humorous but derogatory manner. 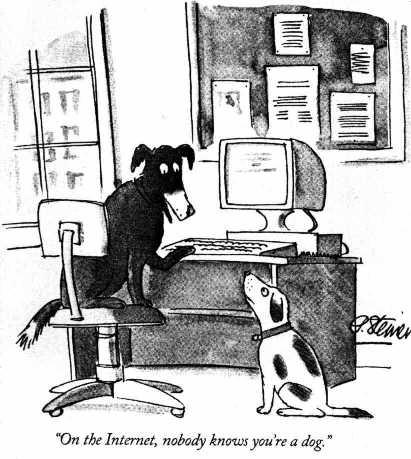 While such stereotypes are presented in the mass media, these programmes or spoofs are for entertainment purposes and it should not hinder our judgement of immigrants. When the mass media plays up certain cultural stereotypes for entertainment purposes or commercialism (provocative topics are more attractive), being objective is very relevant in ensuring that social interactions are not plagued by these negative preconceived notions. Technology such as the Internet helps one in being objective; there is no way of telling who is typing behind the computer screen, “On the Internet,  nobody knows you're a dog”. ( A famous cartoon by Peter Steiner 1993) Also, talent scout programmes such as The Voice, where the contestants have to go through a blind singing test, can be understood as embracing objectivity. As such, objectivity is relevant in helping modern globalised society understand the cultures of “others” and subsequently negotiate the interactions between diverse cultures in an appropriate manner.
As education is increasingly more available to peoples of different parts of the world, there is a new generation of Asian scholars joining the discipline of social sciences. They enter the academia scene, joining Europeans scholars who have dominated for the past two centuries. Contemporary Asian scholars now want to present history in an anti-Eurocentric form, however caution must be taken. Dealing with the concept of value-neutrality, there have been instances of euro-centrism in the past in writings of the “classical” sociologists for example Marx in his over emphasis of the capitalist system in Europe, trivialising the Asian societies. This biases results in inaccurate observations and interpretations of society. In light of this, there is a current trend towards orientalism to portray history from the viewpoint of the Asian societies and cultures. Alatas (1962) and Smail (1961) both advocated an Asia-centric perspective in understanding and reconstructing Southeast Asian history.
While it can be argued that this is employing the concept of value-neutrality by presenting history from another perspective, caution must be taken, as it may backfire. It is easy to fall into the trap of being ethnocentric while trying not to be euro-centric, where things are seen from an Asia-centric view. These contradictions are discussed by Wallerstein, who explains how it is easy to fall into the trap of being euro-centric while trying to be anti-Eurocentric (1997). In addition, the departure point for such orientalist studies is still that of an ethnocentric one, and is not value neutral or objective in anyway. Hence, the solution against euro-centrism is not Asia-centrism; instead we should combine both perspectives, “this whole course of events can only be understood in the framework of global history” to obtain a holistic view of the past (Connell, 1997). Therefore, objectivity is relevant in helping us understand reasons behind the wave of orientalism and the subsequent problems that arises from the Asia-centric writings.
The importance of being value-neutral comes into play in a larger context in academia. Anthropology employs the concept of objectivity and value-neutrality in its fieldwork. Being objective is essential in understanding and documenting the lives of “others”. In anthropology, this concept of being objective is understood as “cultural relativism” (Franz Boas), where no one culture is better than another and all must be viewed equally. When encountering “others” for the first time, it is essential to not have any value-judgements or bias against them, this ensures that the findings obtained are objective and accurate.
However in the modern, globalised world, it is difficult to be completely objective and not have any preconceived notions of “others”. The presence of the Internet, travel guide books, documentaries already presents us with an image of others, and the way the “others” are portrayed will have an impact on how objective one can be and will frame our interactions with the “others”. It is essential to note that having preconceived notions does not mean that one is biased towards or against someone. One can be unbiased, yet already have a preconceived notion of what can be expected in encountering others. There are many cultural practices and traditions in Indonesia Bali, such as Batik, as such when one travels to Bali; there is already a “product” which is Batik that one is searching for, as it is expected. In documentary “Sight Unseen”, the issue of this tension between the tourist and the “native” is illustrated. The tourist, armed with information from the mass media and the Internet, already has a preconceived notion of what Bali is and what cultural “products” one can observe in Bali, and focuses on documenting those “products”. However from the viewpoint of the natives, there is no cultural “product” instead, instead there are cultural processes in their daily life activities and there are changes in the meanings of the enactments of the cultural products that the tourists are documenting. This shows the implications of having preconceived notions on the accuracy of interpretation and fieldwork.
Hence, although objectivity and not having any preconceived notions are valuable in the pursuit of knowledge in the field of anthropology, there is a growing difficulty in achieving full objectivity and exploring the culture of others on a “clean slate” today where information is so easily obtainable.
However, all these problems do not suggest a rejection of objectivity, there are still benefits in applying these methods; instead there should be a reconceptualization. The presence of such preconceived expectations are a product of the information age, and it is difficult to remove such expectations or erase representations that are already ingrained. Perhaps a reconceptualization of objectivity and value neutrality can be to ensure an open mind when interacting with other cultures and be flexible to change on top of being value-neutral.

Wallerstein, Immanuel. 1999. ‘Eurocentrism and its Avatars: The Dilemmas of Social Science’ In Immanuel Wallerstein, The End of the World as we Know it; Social Science for the Twenty-First Century, Minneapolis: University of Minnesota Press, pp 168-184.