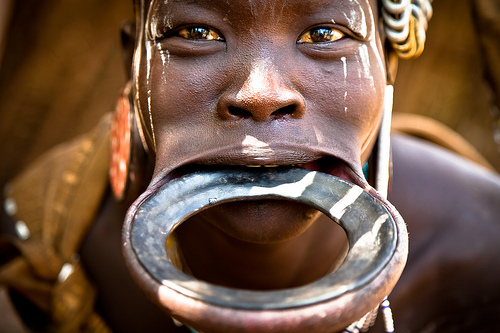 “Beauty is in the eye of the beholder”. Owing to its relativity, beauty takes on different ideas and forms throughout different cultures and societies. To the Mursi women, modifying their appearances through the insertion of the lip-plate symbolises the pride and grace associated with being a woman. More importantly, the lip-plate serves as a mark of the Mursi ethnic identity and holds great significance in the Mursi culture.

The lip-plate and its significance
When a Mursi girl reaches puberty, her lower lip is cut to insert a small wooden peg. Once her lip has been cut and stretched over a period of time, she is defined as being sexually mature. Through this process, the girl attains a new identity. She becomes a bansanai, an indication of her transition from a girl to a woman. Tied tightly to fertility and eligibility for marriage, the lip-plate signifies womanhood.

Women are expected to wear her lip-plate in several occasions, such as when she sets her husband’s garchu (basket for carrying sorghum porridge) or kedem (gourd containing coffee, sour milk or boiled leaves). In such occasions, a woman who has not had her lip cut or fails to wear her lip-plate is said to become vulnerable in the presence of men. Hence it is criticised that she will serve her husband in haste as she feels uncomfortable and self-conscious without a lip-plate. Thus, she is deemed to lack the grace associated with womanhood-to be calm, quiet, hardworking and above all, proud.

Also, a woman who wears a lip-plate is believed to have a healthier cow. Thus, she would be able to collect more milk from a cow than a woman not wearing a lip-plate. In Shauna LaTosky’s field research among the Mursi, she recorded a conversation with a Mursi woman, Bi Kalumi, on the grace her daughter-in-law without a lip-plate lack when milking a cow
"When the mother returns and the calf is released from its pen and given to its mother, she should wait until the udder is warm and full of milk. But Nya Besse does not have her lip cut. She always rushes,’dhel,dhel,dhel!’ and does not leave enough time before the calf is given milk. She does not take time first to stretch and adjust her lip, and put in her lip-plate. She milks immediately and so the calf is always thin. If she has her lip cut, the calf is always big and fat. She will wait for the udder to become warm before she unties it and takes it to its mother. This way it will not become thin. She can tie the calf back up and still get milk from the mother. That’s what I want to say."
There are also occasions a woman is whipped by their husbands when she serves her husband and his guest coffee, sorghum or milk without wearing her lip-plate. Hence, women who do not wear their lip-plates are subjected to scrutiny by both other men and women.
A widow is expected to throw away her lip-plates and never wear them again, even if she is taken in by the brother of her husband. As such, the lip-plate serves as a reminder of a woman’s commitment to her husband. However, there are exceptions if the woman is very young and has not born any children from her previous marriage.

Lip-plate and Mursi women in a modern world 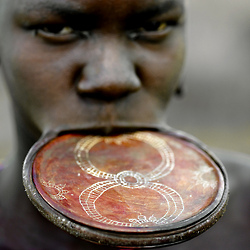 As the ideology of the modern world begins to permeate and influence the secluded society of the Mursi tribe, Mursi women look to better themselves through education, which could aid them in their first steps into the modern society. This would mean that they would have to give up the lip-plate in order to blend into the modern world. As such, the lip-plate is seen as an obstacle for women in becoming a fully educated ‘citizen of the state’. The younger generation view the lip-plate as a sign of backwardness. In an effort to embrace modernity, they choose not to cut their lips or wear lip-plates.
On the other hand, it is precisely this unique tradition that has attracted tourists and subsequently introduced this secular tribe to the modern world. Generally, the older generation of Mursi believe that the lip-plate is a symbol of the Mursi ethnic identity. They believe that it is this tradition that makes them unique. Discarding the lip-plate would be akin to losing one’s ethnic identity. Hence, there are Mursi who still take pride in their culture despite the influences and temptations of the modern world.

Conclusion
As the modern world gradually penetrate the lives of secluded tribes such as the Mursi, it is inevitable that certain beliefs and cultures are threatened. More often than not, these indigenous people leave not only their communities but also vital aspects of their culture behind when they venture beyond their tribes into a world where blending in is paramount to survival.


References
LaTosky, “S. Reflections on the lip-plates of the Mursi women as a source of stigma and self-esteem”. http://www.mursi.org/pdf/latosky.pdf, last accessed: 19th October 2012