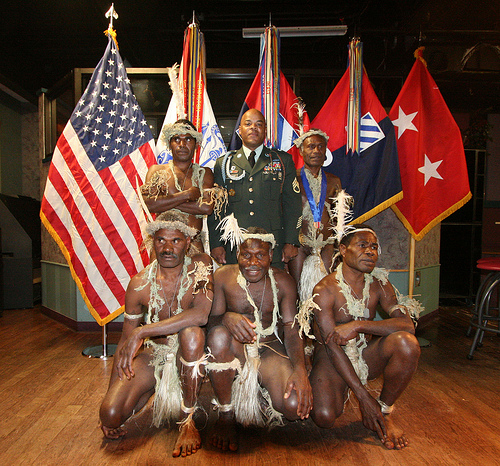 “Meet the Natives” the title of an American reality television series produced by the Travel Channel. The show follows five native tribesmen from the South Pacific Ocean island of Tanna. Chief Mangau, the leader of the tribe, is accompanied by head dancer Keimua, medicine man Sam, “happy man” Kuai and translator Namua (who learnt English in school). The first season of “Meet the Natives” saw the Tanna tribesmen visiting various cities in the UK, and the show was renewed for a second season that brought the group to the USA.
In their journey, a film crew follows the group and documents the events. The tribesmen were also given their own camera, and selected footages from that camera are also shown, and Namua narrates the entire show. I believe that in “Meet the Natives”, the Tanna tribesmen are akin to anthropologists as we understand the study. Despite the relatively short duration they lived with the urban and suburban “natives” of the cities they visited and the lack of rigorous academic grounding, the tribesmen did get a first-hand experience of the lifestyles and “cultures” of their hosts. They lived in a tall apartment building in New York City with a “WASP” woman, herded cows on a cattle ranch in Montana, attended botox parties in Orange County and so on, exploring the foreign places and understanding lifestyles so alien to their own. Throughout all of that, I believe that the Tanna tribesmen made very astute observations about “modern” life. They often compared the social problems they witness with a similar problem at home, expressing great concerns regarding humanity’s development in the cities with empathy and wisdom about these differences.
For me, some of the most salient observations by the natives included their thoughts on the prevalent homelessness in our concrete jungles. Following a visit to the pet groomers in Manchester, the Tanna tribesmen concluded that people in cities treat their pets better than their fellow men, as the pets were brought to nice parlours while people were allowed to sleep in the cold on the streets. In a case of “homelessness” in their tribe, they will just come together and construct a new home for the person or family in need. Other issues raised include their view towards homosexual unions when asked—they described the practicality of heterosexual unions but believe that homosexual unions are fine as long as the two parties care for and love each other, disappointment towards the environmental damages they observed from smoke rising from factory plants, overconsumption of food “that can feed a thousand where they come from” in their farewell party and the need for a more peaceful and harmonious world, a message they want to personally pass on to the “chief” of the USA tribe, Barack Obama.
Anthropologists often study tribesmen like those in “Meet the Natives” by comparing the deviances between cultures and societies across time and space in order to gain a greater understanding of humanity. While “conventional” anthropologists from institutions all over the world still have much to learn about different practices and beliefs such as those of the Tanna tribesmen, I believe that those we usually study have much insight to offer if they assume the role of the anthropologist as well. In our increasingly globalised world where it seems as though we are moving towards a single culture, “Meet the Natives” is important as it provides a unique perspective from “strangers abroad”, who takes note of the small details that is exclusive to the urban culture that most people take for granted.
The episodes have been kindly uploaded onto Youtube byVanatuVeritas (www.youtube.com/user/VanuatuVeritasShare
)