Masculinity Crisis
After the lecture on gender and sexuality, there are some questions that popped into my mind. So what exactly is masculinity? Who defines masculinity? Is it universal and unchanged or is it fluid? And so I went to read up more about masculinity.

Masculinity
Masculinity is a set of qualities that the dominant culture in a society deems as the appropriate behaviour of a man. The masculine traits can varied across culture, displayed in different forms and to different extents. Even though, there are multiple traditional masculine variants, they seem to converge to a viewpoint of seeing masculinity as tough, powerful, independent and respected. One very good example of masculinity display is seen in the Muay Thai of Thailand where masculinity takes on its extreme form in terms of physical embodiment. So is there any other form of masculinity and does masculinity change over time?

Metrosexual – The New Man
In the early 2000s however, with the media influences, there seems to be a shift in the man identity from the tough guy to metrosexual who pays much attention to his personal appearance and cultivates an upscale lifestyle, redefining masculinity. Narcissim and consumerism seems to be traits commonly associated with metrosexual individuals and what traditionally seems to be exclusively feminine is becoming more and more widely accepted by the modern society as a trait of man. In attempts to look like what they saw in the magazines and advertisement commercials, metrosexuals will purchase the products promoted. One of the iconic metrosexual described in an article by Mark Simpson was the international football star David Beckham who is often seen as a fashion icon. His trendy and ever-changing hairstyles often caused a fad among the youngsters especially his soccer fans. David Beckham is often portrayed by the media as a charming and trendy star who is well-liked by girls and looked upon by boys. With the power of media and influential icons like David Beckham, it caused a crisis of masculinity, transforming the prototype of masculine men. However, metrosexuals are often seen as arrogant, self-indulging and unfortunately their sexual orientations are often in doubt, with many being linked to homosexuality. So is man becoming more feminine? Is masculinity being corroded or merely transformed?

Ubersexual – The Future of Men?
It wasn’t long before ubersexual replaced metrosexual to be the newly defined masculine prototype that retains all the positive traits of metrosexual but in addition he is more masculine, heterosexual and cares more for his relationships with others than self. As compared to the meterosexual they are more masculine and confident beside being stylish. They no longer will be mistaken as homosexual as in the case of metrosexuality. The word ubersexual is actually derived from a German word “uber” which means the greatest. One of the most prominent ubersexuals is the rock star and anti-poverty campaigner, Bono. Ubersexual is one who will groom his mind more than grooming his hair in front of the mirror for hours. Ubersexuals are what Marian Salzman called the most attractive and compelling men of the generations. So what do you think?

In my opinion, I think that masculinity is a set of expectations of a man’s behaviour that are socially constructed by the majority of the population or the dominant culture. This masculine prototype will then serve as the guidelines for the men in the population, thus causing conformity. The conformity is further enforced by the discrimination against the minority that deviate from the norm. The deviations are often regarded as “sissy”, “wuss” or “wimp”.

Delving deeper into the reasons of what may affect the social definition of masculinity; one may find the common striking influence of the mass media when you study the rise of the two non-traditional masculine prototypes – metrosexual and ubersexual. The crisis is usually initiated by influential celebrities of high status like David Beckham and Bono who serve as the role models of new definitions of masculinity, even to the extent of transforming it, diluting some existing traits and infusing new traits. 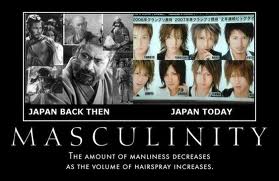 What once seems as masculine may not be masculine in the next generations and similarly what once seems to be exclusively feminine may be accepted as traits of men. There is no fixed form of masculinity as its definition sails along with the flow of the dominant culture’s perception. Some explicit examples are the diminishing traditional masculine traits of being tough in metrosexuals and the resurface of certain level of traditional manliness in ubersexuals.

Furthermore, I think it is kind of ironic that masculinity which is often socially defined by the dominant culture of the majority is in fact largely determined by the mass media. The control of mass media empowers a small minority of media producers; and together they will dictate the definition of masculinity to their fullest benefits. Through constant advertising campaigns in the mass media, the males in the society are driven to buy products that were never once necessary for the males of earlier generations. Male consumerism in my opinion is brought about by the increase in living standards of the general population, resulting in more disposable incomes for the males. And it is the profits reaped from male consumerism that drive the masculinity crisis.

Undoubtedly, these have to be the result of not just the mass media influence but also the changing culture of a modernized world where people are more receptive to ideas and more willing to change. Therefore, there is no universal definition of masculinity that will always be applicable to males of all generations as it is ever-changing with the world’s culture. 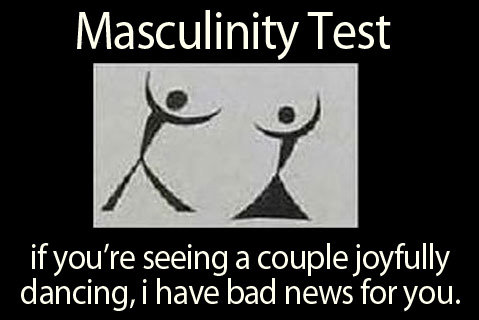