This page includes a summary of a reading excerpt from another module I’m taking, followed by an analysis of how this theory of discursive reproduction of masculinity can give us a better understanding of gender as a performance, as outlined by our guest lecturer during her presentation.

Discursive
In this context, the term ‘discursive’ refers to the continual, ongoing exchange between the recipients and the speaker. Thus, neither party can unilaterally decide on and fix the meaning of what masculinity has and constitutes in the context of society.

Summary
In her work, Jane Sunderland seeks to establish that the distinct speech patterns and markers of gendered speech arose from the discursive reproduction of masculinity and femininity, instead of biological differences in men and women.

According to Jane Sunderland, masculinity and femininity are not permanent or fixed, but instead, fluid in nature. Though they look solid, they are in reality constantly remade on a moment-to-moment basis. Specifically, they are discursively reproduced, through speech and language unique to both genders. Certain kinds of speech and word choices reinforce typical gender stereotypes. For example, speech markers, such as tag questions, frivolous adjectives and emotive language are often associated with female speech as opposed to male speech. This also implies a certain fluffiness, and lack of clout and authority, thus preventing whoever uses such terms from being taken seriously as an individual.

She asserts that these certain sorts of behavior and speech have come to be considered as ‘masculine’ and ‘feminine’ due to the social responses individuals receive when displaying these behavior and speech. Although individuals are given the freedom to experiment with new versions of representing masculinity, there is no guarantee that these new forms will be socially accepted. More often than not, they are viewed as deviant and undesirable. Hence, individuals tend to rely on the pre-existing social constructions – those which elicit positive social response and acceptance. Hence, the social stereotype of how men are expected to behave arose from the historical reproduction of certain forms of masculinity. Instead of ‘doing what comes naturally’, they’re really doing what works best for them. This, in turn, led to the ‘naturalization’ of behavior – the more men adopted such conventional forms of masculinity, the more adept they became at these particular habits and lost touch with their other linguistic and behavioral facets. For example, men tend to avoid portraying the image of emotional beings. However, due to the constant adaptation of this image, some might find it difficult to portray themselves as emotionally capable beings when the situation calls for it. In the reading, an example was used to illustrate this. A man, who was advised by a marriage counselor to be more expressive of his emotions towards his wife, did so by helping her wash her car. From this, she concludes that when it comes to expressing certain feelings and emotions, men are ‘literally out of practice’. The constant indulgence in rewarding masculine behavior thus cements these conventional forms of masculinity as ‘second nature’ and misconstrued as a result of essentialist reasons.

Just like the Lyo and Merly pointed out in the lecture, this article asserts that the distinct and unique gendered characteristics are constantly made and remade from our day to day life. As time passes and society cycled through the different iterations of culture, such social categories change as well. In the past, wearing pants was considered something undesirable and unfeminine. Femininity stemmed from a woman’s gentle, demure carriage, her modest dresses, long hair and shy demeanor. Today, what is considered as feminine has changed; we no longer think of pants as unfeminine, short skirts as indecent, and boldness and assertiveness as characteristics which are exclusive to the male realm. That being said, society today still has its own set of cultural rules that guide the discursive reproduction of the two genders. Though the image of working women is not unheard of anymore, there is still an expectation for them to be caring, genteel and understanding wives to their husbands. The stigma attached to emotional displays by men is still very much present, and so are the connotations attached to using flowery, frivolous words in conversation.

As such, we can see that gender today is still very much a performance - certain behaviour, gestures, clothes, gendered objects, are all part of our continuous performance of gender in the society. However, that doesn't mean that these categories or its markers are static. In fact, they remain very flexible and malleable. Almost anything can be appropriated as a characteristic of gender performativity, but it needs to elicit a positive affirmation and response from the society which acknowledges it as one.

The video above illustrates how gender is really performed to ‘complete the package’ of the ‘most possible feminine look’. The person in the video also states that it is ‘jarring’ for someone to hear a very masculine voice with an outwardly female appearance. The two polar opposite voices show that often, feminine and masculine voices are not as ‘natural’ as we might think they are. Because we were born into this society and commenced our socialization process immediately, it is easy to think of gendered characteristics, such as voices, as something which is a natural manifestation of our biological differences. As proven by this video, that is not always the case. In fact, with practice, we can take on an identity of either genders, so long as we put on the mantle of gendered characteristics required.

In this point about gender performativity, I would also like to give the example about gender, sports and how the society think about certain sports. Being a sportswoman myself, I do find it interesting to raise the point that sports is also a gendered topic. What do I mean by this? Sports can be simply defined as organized, competitive, entertaining, and skillful physical activity requiring commitment, strategy, and fair play, in which a winner can be defined by objective means. It is governed by a set of rules or customs. (from wikipedia: http://en.wikipedia.org/wiki/Sport).

However, the society views it as otherwise.

Sport is a social and cultural process in which social constructions of masculinity and femininity play a key role - sport is traditionally associated with masculinity. Even in our society, where there seem to be gender equality in sports, there are still certain sports which the Singaporean society cannot exactly accept women doing, especially when it is concerned with changing the image of feminity, one of which is BODYBUILDING. Have you seen this lady before? 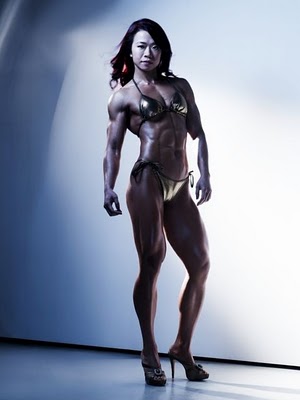 She is actually one of the few female bodybuilders in Singapore - Joan Liew. Bodybuilding is seen as a very masculine sport as it involves hours of training to build huge muscles, tanning to make the skin look darker so that the muscles would 'shine' doing competitions. Nothing very feminine about it right? Although Joan Liew has represented Singapore in many bodybuilding competitions and also did Singapore proud by winning many, she still isn't that well known and not featured much and her body image might actually bring repulsion to many people. As you view this photograph, how do you feel? Does it seem weird to see a body of bulging muscles in a bikini fit with a woman with makeup on her face? If that's what you are feeling, it is normal and is a reflection of how the society views feminity. Like the YOUtube video, it is very jarring to see a female face in a seemingly masculine body as well.


There is an article that might interest you which features Joan Liew: http://thestar.com.my/news/story.asp?file=/2009/4/18/lifefocus/3693071&sec=lifefocus