In an effort to achieve the coveted runway model bodies, women take on gruelling workouts and tormenting diet plans. As the saying goes: “No pain, no gain”. Beauty always came with a price. From ankle breaking stilettos to the suffocating tight lacing that was practiced in the western world during the 16th century, beauty and pain always came in pairs. However, the practice of foot binding in China took the correlation between pain and beauty to a whole new level. For one millennium, tiny feet were the obsession for almost every woman in the country as it became a prerequisite for finding a husband and an avenue for poor women to marry into wealthy households. 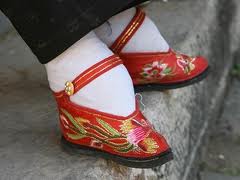 The foot binding process
The torturous process of foot binding began for most women between the ages of five and twelve. It was usually initiated by the mother or an elder village woman. The procedure begins with cleaning and soaking of the girl’s feet. Some of the ingredients for the footbath included ground almonds, mulberry roots, tannin, urine and frankincense. Other less common ingredients included boiled monkey bones or warm animal blood. These ingredients would then be added into warm water to form the footbath. After the foot bath, exfoliation of dead skin and trimming of toe nails, the binding procedure would follow. The four smaller toes were curled under then pressed with great force downwards and squeezed into the sole, breaking the toes in the process. A bandage was then wrapped tightly around the foot in a figure eight motion. This pulled the heel of the foot forward towards the ball of the foot, breaking the arch of the foot and shortening the length. The bones would usually remain broken in the first few years. Even as the bones heal, girls whose feet were still growing often experience re-breaking. There were also instances where the toes would fall off due to poor blood circulation as a result of tight bandaging. Others inserted metal or porcelain shards to induce gangrene so that necrotic flesh could be removed to form even tinier feet. 10% of women did not survive the process.
Apart from tightening the bandage, regular rebinding also became an integral part of hygiene. In the early stages of foot binding, the foot is often swollen and filled with pus. Some women applied alum or washed in scented water to eliminate odour. Others soaked their feet in urine to relieve swelling and prevent expansion of the compressed area. Over a period of two to three years, the bandage would be tightened on a regular basis and the feet would eventually shrink enough to fit into the coveted three inch ‘lotus shoes’. The ideal feet was coined the ‘Golden Lotus’. Pride in these tiny three inch feet was reflected in the intricately embroidered wrappings and silk shoes worn to cover the feet. Bounded feet made it impossible for women to balance their walk with their toes. Hence they had to bend their knees slightly and swayed while walking to maintain their balance. The result: a mincing walk coined the ‘lotus gait’ that was seen by men as sexually enticing. 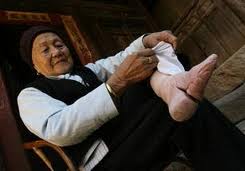 The journey of foot binding and its significance

The original wrapping of a woman’s feet was not done with the intention of deforming them. The idea was first introduced around 970 A.D., during the rule of Li Yu. The ruler’s favourite consort, Yao Niang, performed a dance atop a golden lotus pedestal. Her feet were wrapped in long strips of silk cloth and resembled a ballerina on pointe. Li Yu was captivated with the beauty of her movement. As such, other court maidens followed suit and ‘Golden Lotus’ became a euphemism for their bound feet. From then on, the custom was adopted by the loyalty before spreading out to the elite and wealthiest parts of China. Foot binding amongst the wealthy signified that women from such immensely wealthy households were free from manual labour. It also implied that husbands of such women could afford wives who did not need to work and existed solely to serve their men and direct household servants. Bound feet later became a prerequisite for marriage and an avenue for poor women to marry into wealthier households. Bounded feet not only served as a sexual appeal for men but also reinforced the idea of male ownership and chastity. Guo Zhu-Juan, a lady from a wealthy family who started binding her feet when she was eight years old, gave a recount of how life used to be for girls from the upper class

“Actually, young woman of the upper class were not to go outside the walls of their courtyards. As was typical for a family like mine, we had walls in front of our main gate built in such a way that one could look out at the people going by, but it was impossible for them to look in. This was normally the extent of a young girl’s exposure to the outside world.”

As such, women bounded their future together with their feet, as their immobility kept them from education and opportunities beyond their homes. Foot binding remained an integral part of the Chinese society until the 20th century. Although the Manchu leaders never adopted the custom, they tried with little success to end it. During the late 1800s, reform orientated scholars and western missionaries took their stand against the practice. Yet change only took hold in the 1920s and only declined significantly when the communists took power in 1949 and banned the practice.

Summary
Many of them bound their feet simply because they yearned for a better life. As 81 year old Shi Gui Hua, whom has bounded her feet since she was 5 years of age, puts it:

“I don’t have any idea where this custom came from, but in my day everyone did it, no matter who you were. The purpose of it was twofold: first, a woman was not considered attractive unless she had bound her feet. This was the only standard for determining beauty. No one wanted to marry a woman with big feet- that isn’t attractive at all. Secondly, the smaller your feet, the better the husband you would get- maybe someone with money or position in society. It was true, too- it worked”

Although majority of the remaining women with bounded express pride in their tiny feet, they have reconciled with the fact that bounded feet robbed women of their freedom and prevented them from receiving education. Guo Zhu Juan expresses her dismay towards the custom by saying:

“When I look back upon it now, I feel very angry because if u had bound your feet, you could not go to school and get an education. So I cannot even read or sign my name properly. I have no culture, no education! This I am extremely angry about! That is why I wanted to make sure my sons and daughter all had good educations. Now they are successful and have very good jobs”

Foot binding, a seemingly legitimate custom designed to benefit males, is a fine example where women have been manipulated by beauty, which plays a pivotal role in a woman’s life. Although women are no longer confined by such customs, there is an interesting question one could ask: Are women in today’s society puppets of the fashion consumer industry?