Singapore’s desire for a national symbol extends beyond the need for others to recognize them, to maintain the ‘them-us’ distinction that allows for boundaries of national identity to be maintained from an outsider’s perspective. It also includes the need to unite the citizens of the Singapore. Ex-Minister Mentor Lee once said that Singapore is not yet a nation, and therefore, this might have served as the impetus to find further national symbols to hasten the sense of unity among the people. This has extended to the reach of including nature into national symbols.

Given Singapore’s lack of history and monuments which can be a rallying point for Singaporeans, there is a need to create national symbols to supposedly unite the people. Using nature as national symbols thus seems a rational choice, with the rich biodiversity present.

Do you know what the national bird of Singapore is?

In 2002, there was a poll to find the national bird of Singapore which is supposed to sum up the characteristics and the spirit of Singapore. The poll was an unofficial and informal one organized by the Nature Society of Singapore to stimulate interest in wildlife.
The candidates were as follows:

'The [black-naped] oriole is an imperial yellow colour, the [white-bellied fish] eagle is huge, beautiful and majestic, the [greater racket-tailed] drongo is elegant, the crimson sunbird is a tiny red dot and the olive-backed sunbird is a nesting family bird.'

Other Possible Candidates
The fact is that few members of the public would know much about these native birds, as opposed to the common birds seen in Singapore, like crows and mynahs, which are likely to be the birds that normal, ordinary Singaporeans can identify with.

Crows are said to be discounted as it is not native to Singapore and carries negative connotations. Besides the native-migrant issue (people issues is seen to be extended to birds), the idea of people understanding crows in a negative light all points to the fact of shared beliefs- any national symbol must be native or ‘made in Singapore’ to be befitting of its status and portrays the country in a positive light. Mynahs, while not stated, are likely excluded as it does not reflect the status befitting of a country, precisely because it is too common.The shared consensus on what should be excluded as candidates points to a system of shared meanings in place, and therefore to the presence of culture.

Some also suggested the crane as a national bird. It was rejected since the crane they referred to was the one in mrbrown’s Complaint Choir Song- “the one with yellow steel girders”. This joke is telling about the state of affairs in Singapore. With a priority of urbanising, often at the expense of heritage, be it natural or cultural, the crane actually reflects the Singapore spirit well- that of progress being prioritized as well as its association with globalisation through well-developed infrastructure. That Singaporeans share and appreciated the joke, which is likely to be unintelligible to foreigners without much explanation and thus excludes them from the sense of community, points to them recognising the push for progress as a marker of what is Singapore.

The Unofficial National Bird of Singapore
The results of the poll made the crimson sunbird the national bird of Singapore. Apparently, many thought the size and its colour fitted in well with Singapore’s image- small being its size on the map and red being used in many of Singapore’s national symbols. 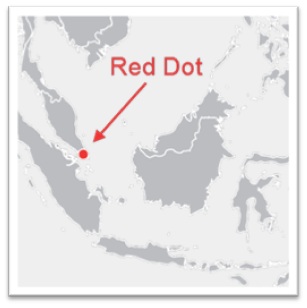 The reasons for the choice show the arbitrariness of the symbols in representing aspects of Singapore. Instead of representing the small-ness of Singapore on the physical map, Singapore can easily be represented by a bird that is huge, to emphasise it punching above its weight in global platforms, especially economically. Other colours like white can be emphasised too, since it is a colour of the flag.

The random nature of the symbol is further seen in the characteristics attributed to the bird. While the size and colour are physical characteristics of Singapore, the spirit of Singapore might be better represented by other candidates, like that of the peaceful black-naped oriole, which reflects Singapore’s stance on diplomacy.

Given the numerous, equally salient markers of national identity, the selection of a few to represent a nation can be said to be an arbitrary process.

The branding of the crimson sunbird as a ‘tiny red dot’ also shows the ideological agreement between the government and its citizens. Besides the red dot literally representing Singapore’s location on a world map, it is a loaded phrase with much ideological significance. A former Indonesian President was alleged to use the phrase negatively in describing Singapore. However, through subversion by the Singaporean politicians (they tagged on the implication of ‘look at our achievements despite our size’); it has become a phrase used by Singaporeans with a sense of pride. The choice of the sunbird in relation to its branding thus shows an agreement between all levels of society on what Singapore is. It is also an exclusionary system of shared meanings as foreigners might never appreciate the full historical and geopolitical significance of such a phrase. This ideology thus maintains the boundaries of the Singapore community.

While individuals have various reasons for choosing a particular bird as a national symbol, through the characteristics of the various candidates and the eventual choice of the crimson sunbird, it can be seen that common beliefs underlie the selection. These beliefs are seen to exclude outsiders and the practice of them (which manifests themselves in jokes and using phrases in association with specific meanings) therefore maintain the boundaries of the Singapore community.