Rituals, according to Oxford Dictionaries, refer to a religious or solemn ceremony consisting of a series of actions performed according to a prescribed order. There are many rituals that people take part in, even in modern society, and each has their own meanings and symbolisms. Some rituals are used in weddings, funerals, healing, and even in childbirth. Such rituals might be conducted in public (for example, wedding rituals), or in private (such as rituals involved in childbirth) (Rook, 1984). Someone who is given the authority and respect by others commonly conducts such rituals.
Rituals tend to be culturally associated and are ceremonies that are resistant to change (Rook, 1984) and are passed down from generation to generation. For the most part, rituals act as a symbolic medium for creating and maintaining social ties and dependencies to the community (Erdogu, 2009). This might be reflective of the Ju/’hoansi (Lee, 2012), who share the same belief that //gangwasi (ghosts of recently deceased Ju/’hoansi) cause illness or misfortune to the living. The sharing of such a belief unites the Ju/’hoansi and strengthen social ties as the people are dependent on one another (especially the n/um k”ausi, the medicine owners) to help heal the sick.
In my opinion, it is noteworthy that some rituals produce intangible effects (such as rituals to communicate with the deceased for healing purposes), while others produce more tangible effects (such as wedding rituals). There are many meanings and symbolisms behind both tangible and intangible rituals and some are discussed below.
Rituals as a Means of Communication (Intangible effects)
We see, in some cultures, that rituals are conducted as a form of communication with the spiritual world.
In the case of Ju/’hoansi (Lee, 2012), the healing rituals are conducted by the n/um k”ausi who have been trained and have earned their status as a healer. N/um k”ausi, during their healing rituals, communicate with the spiritual world (the //gangwasi) in the hope of finding the reason why he/she (the //gangwasi) is causing illness or misfortune to the living. 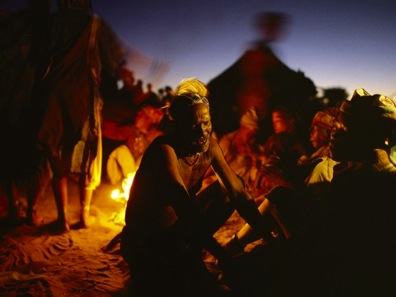 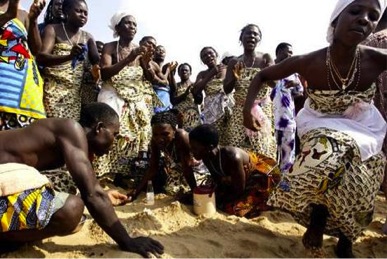 Fig 2.0. (Laveau, M., n.d)
The Tuareg people of ***** Republic, West Africa (Rasmussen, 2000) also believe that there are higher powers that control and affect the lives of the living. Takote, meaning almsgiving, rituals are conducted in many rites of passage but is most important in funerals. Funeral takote rituals are used as a means of communication between the deceased and their descendants. The elders conduct takote rituals, and they play prominent roles in many other rituals as well. The ritual forges connections between the present and the past and therefore can also serve as a means to reflect and comment about the past and future intergenerational conducts (Rasmussen, 2000).
Rituals as a Means to Symbolize Transitions (Tangible effects)
It is very common that rituals are used to symbolize transitions.Through these rituals, people take up new responsibilities and new roles that are acknowledged by the society.
For instance, the funeral takote rituals (as mentioned earlier) are conducted for those who have passed on. Even though it is used as a means to communicate with the dead, it is also a means to recognize the transition from living to deceased. The Tuareg (Rasmussen, 2000) elders also conduct other rites of passage such as naming rituals. Babies are only named on the eighth day after birth and this symbolizes their transition into the living world. This is similar to the Mt. Yagaw Hanunóo people from the Philippines (Conklin, 2011) where grandparents play important roles in choosing the name of the newborn, which can possibly be seen as a ritual to symbolize the baby’s transition into the living world. To the Tuareg elders, who conduct most of the rituals, Tuareg takote rituals offer an opportunity to strengthen personal sociopolitical networks and to be recognized as proto-ancestors or pre-ancestral in their lifetime (Rasmussen, 2000). By conducting the rituals, the elders undergo their own personal transition into becoming a ‘new’ person.
In South India (Nishimura, 1996), rituals are used to mark transitions between social statuses. For example, wedding rituals are used to acknowledge the transition of the bride and groom into their new social status of ‘married’. It is also used as a means to legitimize offspring. Wedding rituals will allow confirmation of whose bloodline a child belongs to. South Indian wedding rituals not only symbolize transitions from the social status of singlehood to married-hood, but also marks the change of status of the individuals involved in the ritual. The bride and groom, after the wedding ritual, will assume a new status within their own families. They are no longer son and brother, or daughter and sister, but also husband and son-in-law, or wife and daughter-in-law. Even between husband and wife, there would be new statuses based on certain gender hierarchies that are maintained in that culture or society. 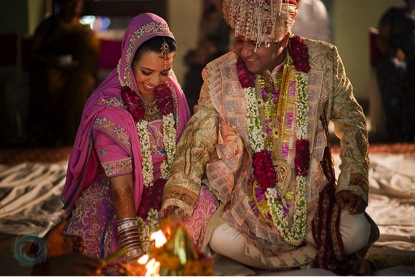 Fig 3.0. (2011)
This is similar to that reflected in the film “Dadi’s Family” (Camerini and Gill, 1981). Women in that society are married out of the family and most often move to stay with the husband’s family. As women stay away from their families, they are considered to be daughters-in-law in that society or village in which their husbands live, and therefore have a lower social status, as they do not belong from that society or village originally. When these women go back to their home village or society, they resume their higher social status as daughters. As such, from these two examples (Dadi’s family and South Indians), we can see that wedding rituals mark transitions between social statuses and they affect how the society will act towards them.
Conclusion
Rituals are conducted by many and in different contexts. Each ritual has a specific meaning and symbolism that is unique to each culture and/or society.
For rituals that are conducted for communication, the people engage in such rituals due to the beliefs that their lives are controlled and/or affected by spiritual beings or higher powers. The rituals serve as a means to communicate with spiritual beings or higher powers in order for the living to feel as if they have some control over their own lives. Thus, providing an intangible effect that may not necessarily be physically visible to the naked eye. For rituals that are conducted to mark transitions, the rituals have a more tangible effect whereby people in the society acknowledge the transition. For example, wedding rituals (as mentioned earlier) allow the society to acknowledge the transition of the bride and groom from singlehood into married-hood and the new social statuses and responsibilities that come with married-hood.
Most, if not all, rituals lie in the center of the core belief systems of the people who practice them. Rituals bring about a sense of group identity, and therefore strengthen and build community. Regardless of whether or not such rituals are conducted in public or in private, or if the rituals produce tangible or intangible effects, most rituals (such as healing rituals) are conducted to feed the spiritual and psychological beings of people. It is in the belief that such rituals serve a purpose that they bring about physical effects.
References:
1. Conklin, H. C. “Maling, a Hanunóo Girl from the Philippines.” Everyday Life In Southeast Asia. Ed. Adams, K. M., and Gillogly, K. A. Indiana University Press, 2011. 65-78. Print.
2. Dadi’s Family. Dir. Camerini, M., and Gill, R. Color, 1981. Film.
3. Erdogu, B. “Ritual symbolism in the early chalcolithic period of Central Anatolia.” Journal for Interdisciplinary Research on Religion and Science 5 (2009). Web 18 Sept. 2012.
4. Johns, C. Bushmen Healing Ceremony. 2011. National Geographic magazine.
5. Lee, R. B. “Coping with Life: Religion, World View, and Healing.” The Dobe Ju/’hoansi. Wadsworth Cengage Learning, 2012. 137-153. Print.
6. Nishimura, Y. “South Indian Wedding Rituals. A Comparison of Gender Hierarchy.” Anthropos 91:4/6 (1996): 411-423. Web. 11 Sept. 2012.
7. Rasmussen, S. J. “Alms, Elders, and Ancestors: The Spirit of the Gift among the Tuareg.” Ethnology 39:1 (2000): 15-38. Web. 5 Sept. 2012.
8. "Ritual". Oxford Dictionaries. Oxford University Press, 2010. Web.18 Sept. 2012
9. Rook, D. W. “Ritual Behavior and Consumer Symbolism.” Advances in Consumer Research 11 (1984): 279-284. Web. 18 Sept. 2012.