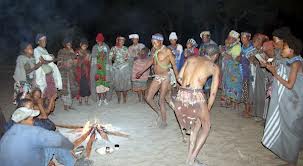 Like all people, the Ju/'hoansi face illness, misfortune, and death. They seek to counteract these forces and gain control over their lives. The cultural meaning they give to death, its causes and aftermath helps them make sense of the world. TheJu/'hoansi hold the //gangwasi (ghosts of recently deceasedJu/'hoansi) responsible for serious illness and accidental misfortune. In order to deflect these spirits, they have rituals such as n/um, where trained healers are able to enter trances and heal the sick.

TheJu/'hoansi have two major deities, a high god called //gangwan!an!a and //gangwa maste, the smaller trickster god. Some Ju regard big //gangwa as a creator, remote and inaccessible, and see small god //gangwa as the destroyer, the main source of death. Nevertheless they agree that the main agency from which calamity strikes is the //gangwasi, the spirits of the dead.
I shall make an observation about the functions of the //gangwasi in theJu/'hoansi context. From their understanding of the //gangwasi, it is these spiritsd who are able to judge who is right or wrong (from an interview with a Ju, Kumsa on pg 142 in the book, The DobeJu/'hoansi). If they do evil, they bear consequences of the //gangwasi's wrath. In comparison, it has a similar principle to many religions in the world where God is omnipresentand discerning of the mortal's actions In addition, there are often repercussions to bad behaviour. Therefore the //gangwasi act like the supernatural police in Dobe, and thus compels the Ju to be compliant to rules and regulations. 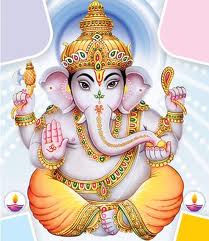 In my opinion, the concept of retribution is similar to Hinduism in our modern context. Hindu mystical tendencies are comparable to theJu/'hoan idea of //gangwasi. Hindus believe in reincarnation, that the soul returns in a new form after death. The form in which it returns depends on how one lived one's previous life. People who live in a way that is appropriate to their position in society will live better future lives, and those who do not will live an inferior life when they are reincarnated. In the worst case, evildoers will be reincarnated as nonhumans (consequence). Moreover, there are many gods in the Hindu tradition, unlike other religions where there is one true God.
According to the DobeJu/'hoansi book by Richard Lee, the n/um healing dances are the main ritual activity of theJu/'hoansi. The presence of sickness is not the only reason for dancing. These dances serve a social as well as sacred function. This echos Emile Durkheim's definition of a religious experience. Durkheim said that when people live together, they come to share common sentiments and values. These common sentiments and values form a collective conscience that is larger than any individual. On occasion, we experience the collective conscience directly. This causes us to distinguish the secular, everyday world of the profane from the religious, transcendent world of the sacred. We designate certain objects assymbolizing the sacred, and Durkheim called these objects totems. We invent certain public practices to connect us with the sacred and Durkheim referred to these practices as rituals. The effect (or function) of rituals and of religion as a whole is to reinforce social solidarity.
Therefore these healing dances act as bonding sessions for the Ju; the ghosts attack, and the living must unite to defend themselves.
References:
The DobeJu/'hoansi by Richard B. Lee
Sociology; your compass for a new world by Robert J. Brym and John Lie